KO BIDET. The cheapest is also the best. VERTICAL water jet, so: 1.It is 100% effective, 2.Thanks to its VERTICAL WATER JET it doesn't push filthy water to uro-genitalia, as the majority of other bidets do.

3.It never wets cloths, or does not  splash water around.4.It makes the dangerous, for microbe harboring, hot water heated topically, useless. 5.Money, space and time saving. 6. It is the only one that can be used with toilet risers and wheel chairs. 7. Easily installed. It is just sticking on the bowl. No tools.. 8.Only 3 the steps to use 9.It never leaks. Recuperation in 2 months.       We look for distributors. 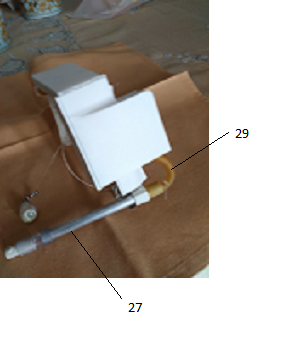 Fig. A.  The apparatus picture as it is sold.. 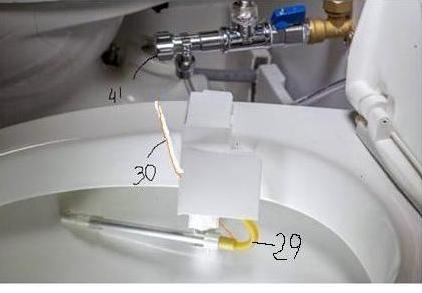 Fig.F. The  apparatus as it is seen from inside with the lid up. 30: plastic thead, 29: elasti tube,
41:The plump components. The aluminium wand is also shown 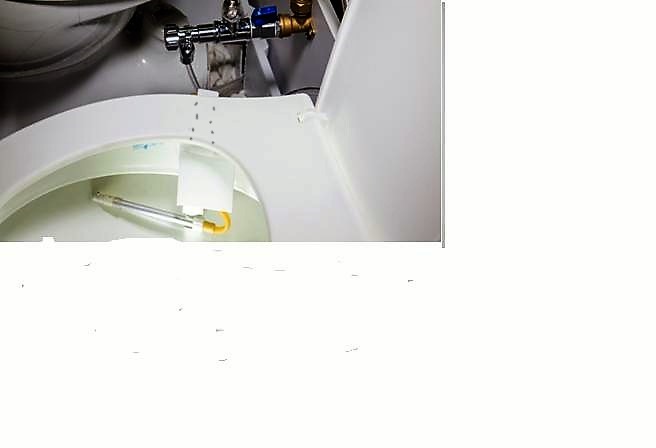 fig. G. The apparatus as seen from above, with the lid down. Fig. H.  The apparatus as seen from outside with the lid up. 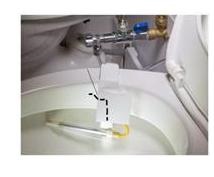 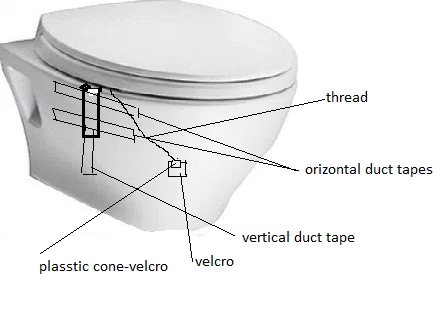 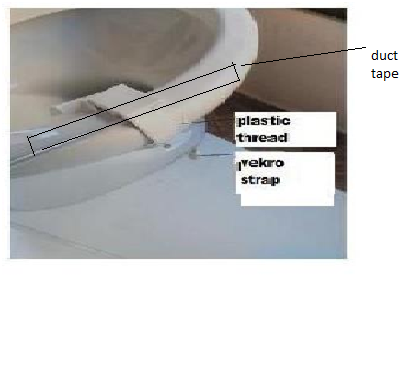 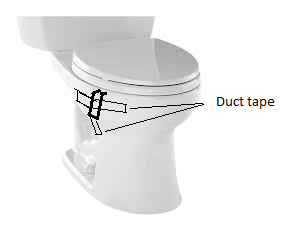 A.     The apparatus installment.

1.   The apparatus sits, saddle like, on bowl's RIGHT rim (as we are sitting on the bowl), fig. F,  G,  H, at  the same way as a usual disinfectant. Thanks to its aluminum frame, it can be adjusted to rim’s shape at the position that suits us. Its best place, at function position, is when the flash nozzle is over bowl's hole.

2.  We insert the wire hook inside one of the holes, under the rim, or in the canal, if there aren't holes. fig. O

Our aim is to stabilise the apparatus in a position, so the aluminium wand, fig. F, G H, O, with the nozzle, moves freely and horizontally, not hindered by bowl's wall, when we pull the plastic thread in order to get the app. in a use position , see video.

*We care lid's pad not to coincide with apparatus. Final and full stabilisation is offered by toilet lip, when we put it down.

4.   On the external surface of toilet bowl, fig. Q, R, at the end of the thread, there is connected a small plastic cone covered with a female piece of velcrome and accordingly a male one, which  we stick on bowl’s surface in such a place so, when we pull the thread-cone and stick it, the metal wand  emerges at about the center inside the bowl, always at the same point.

* At first testing we take care that all tube parts carrying the water are NOT BLOCKED, particularly the elastic tube 29, fig. F, at its curving.

* We also take care the plastic thread is ABOVE the duct straps and free to be pulled.

* Elastic tube:  before turning ON the walve 41, we are sure is not pressed or blocked by anything, or curved abruptly in a narrow angle. .

2. When on travel, or when you don't want any plumping work, for quick installation in 2',. we just screw the angle valve with the shower tube and fix the valve with a tape, on the steady part of the tube feeding the toilet tank. As a second choice use a T to have working both, shower and bidet.